Notes: Elizabeth Hopkins, nee Thomas (1882-1959) and David Hopkins (1877-1949) - married 8th October 1905. Photograph taken around 16th November 1914 when David enlisted in the South Wales Borderers. David and Elizabeth already had four children, the eldest only 8 years old, the youngest 21 months. Although David is proud to have volunteered Elizabeth looks distinctly worried about the future - with good reason for David was seriously wounded at Gallipoli from which he never fully recovered.

Notes: Rowena Hopkin joined the Scottish Women's Hospitals in 1916, and seems to have worked in Serbia. She married GW Field in 1918; some of their correpondence survives. 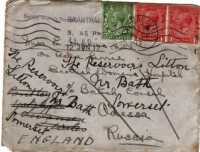 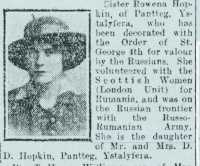 Photograph and report of Rowena Hopkin’s award of the Order of St George. Herald of Wales 5th May 1917

Name of M A James, VAD, on memorial in Llandre Church to those who served in the War.

Notes: Abigail James lived in Brynhyfryd Swansea. She worked in the Swansea National Shell Factory as a Thread Miller.

Notes:
Ada was a 22 year-old munitions worker from Hafod, Swansea. She was working in a munitions factory in Sheffield when she won £1 in a beauty competition sponsored by the Sheffield Telegraph. 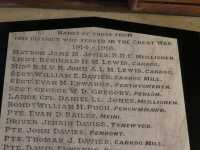 Notes: 'My grandmother Olwen Jones with her two daughters, Dora Louise, on the left, aged two+ and Frances, right thirteen months younger.  This was taken in 1916, when my grandfather [Percy Jones, Welsh Regiment] was conscripted and sent to France.  He was wounded, but eventually returned to Abercarn and they had two more children post the war.' Rosemary Scadden.

Olwen Jones with her daughters Dora and Frances. Photograph taken when husbad Percy Jones was conscripted in 1916.

Notes: Lilian Laloe was the daughter of Auguste Felix Laloe, a teacher from France who became headmaster of the Queen Elixabeth Grammar School in 1874. She joined the Scottish Womens Hospitals as a cook, but was rapidly promoted to Adminstrator.