Notes: Olive, born 1886, joined the Post Office in Newport as a learner in 1903. She later worked in Totnes and Pontypool. In November 1917 she joined the WAAC as a signaller-telegraphist, and was sent to Abbeville in northern France, later transferring to Calais. Whilst home on leave in May 1918 she became ill, and was medically discharged from the WAAC in August. Though she returned to civilian work, she died of the complications of Spanish Flu. Her name appears on the memorial plaque in St Julian’s Methodist Church, Newport, and she is buried in Christchurch cemetery.

Notes: Annie Whyte was associated with Roath Road Wesleyan Methodist Church, Cardiff. She initially joined the WAAC but transferred to the WRAF on its formation in spring 1918. She worked primarily at the Royal Flying Corps Armament School at Uxbridge. Image and information courtesy of Glamorgan Archives (DWESA6).

Notes: Aldwyth was the only daughter of the Rector of Llanbedr-y-Cennin. She joined the VAD early in the war, and worked for three days a week in the Red Cross hospitals in Llandudno, cooking and cleaning as well as nursing. She was 26 when she died.

Notes: Alice Williams was a member of the French Red Cross and had a 'lifelong connection' with Roath Road Wesleyan Methodist Church, Cardiff. The Roath Road Roamer reported in June 1917 ‘Miss Williams has been in the thick of things – as a nurse for two years, and this is the first time she has left France. Much of her time she has spent within three miles of the German trenches so she knows something about things and has an interesting story to tell'. She is dressed here in the uniform of the French Red Cross. Image and information courtesy of Glamorgan Archives (DWESA6).

Alice Williams was a member of the French Red Cross working at field hospitals in France 1915 – 1918.

Notes: Alice Williams, born in 1863, was the youngest of 12 children of David Williams, MP for Merioneth. Having to live at home as her mother’s companion she occupied herself in eisteddfodau, amateur dramatics and women’s suffrage. After her mother’s death, when Alice was forty, she divided much of her time between London and Paris, where she met her lifelong companion Fanny Laming. At the outbreak of the war they both worked for the International Red Cross in Geneva, but in 1915 she set up a bureau in Paris (and later London) to seek and disseminate news of persons missing as a result of the war. Later that year she became organising secretary for Wales of the French Wounded Emergency Fund. She was awarded the Médaille de la Reconnaissance Française in 1920. In 1916 she was founder/President of the fourth branch of the Women’s Institute in Wales (at Deudraeth), providing it with the hall which is still in use. She also was the founder editor of Home and Country, the WI magazine. At the 1917 Eisteddfod she was admitted (as a dramatic writer) to the Gorsedd of Bards, taking the bardic name Alys Meirion. Immediately after the war, in 1919, she and Fanny founded the residential Forum Club in London, a popular social space for women only, including Viscountess Rhondda. 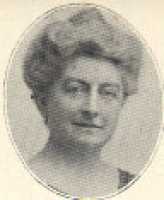 First edition of the WI magazine Home and Country, which was edited by Alice Williams. She is second from the right in the photograph. She also served as the WI Treasurer 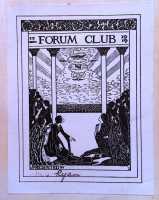 Bookplate of the Forum Club, London, founded by Alice Williams and Fanny Lanbury.

Notes: Elsie’s name appears on a list of names of women who died working in the Women’s Forage Corps. Her next of kin is given as Mrs Williams, 7 Cyrils Place, Abertillery. Nothing further is known of her.

Notes: Elsie’s name appears on a list of names of women who died working in the Women’s Forage Corps. Her next of kin is given as Mrs Williams, 7 Cyril Place, Abertillery. Nothing further is known of her.

List of members of the WFC who died in service.

Notes: Elsie Williams claimed that she was sexually assaulted on a train by a foreman at the same munitions factory, and became pregnant. The Court at Swansea agreed that he was the father of her child. 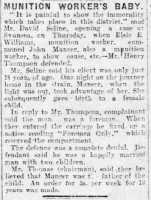