Notes: May had been a senior stewardess with the Cunard Steam Ship Company for many years. She drowned aged 43 when SS Lusitania was torpedoed on 17th May 1917, together with 14 other stewardesses including Jane Howdle [qv]. Eight survived. She was buried with other victims at Old Cobh Cemetery, Queenstown, Ireland. 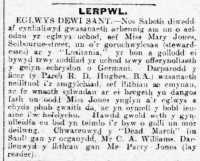 Notes: Polly Phillips had been a stewardess with the Cunard company from about 1911, based in Glasgow. She was on the Lusitania when it was torpedoed on 7th May 1915. It was not known initially whether she had survived but the good news came when her brother and his family ‘were at church’ in Swansea. 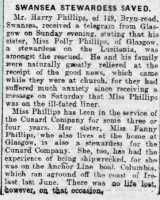 Report of the survival of Polly Phillips, stewardess on the Lusitania. Cambria Daily Leader 10 May 1915

Notes: Margaret Foulkes, was born in Wales and brought up in Liverpool. She was a widow, and had worked on the Lusitania before the final voyage; stewardesses seem to have been employed by the voyage. She drowned when the ship was torpedoed on May 7th 1915, aged 42. Her body was never found.

Notes: Mary Ann was a store hand in the Women’s Forage Corps, which sourced and processed feed for the Army’s horses. Over one million horses and mules were used by the British Army during the War, mostly for haulage and transport. Mary Ann was 39 when she died; her next of kin was her father Thomas Whaley of Cardiff.

Mary Ann’s name on Nominal Roll of Officials and Member[s] who have died while serving in the W.F.C

Notes: Mrs Holland was demobilised from the WRAF in October 1919, when she was 30 years old. Her work was described as ‘very good’. She enrolled and worked in London, and was married, though we do not know her maiden name. Her name appears on the Roll of Honour at Pisgah Chapel, Talywain. 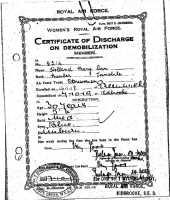 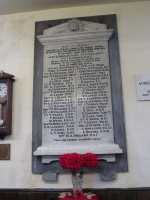 Mrs M A Holland’s name on the Roll of Honour at Pisgah Chapel, Talywain.

Notes: Emily Evans of Pembroke Dock was fined £7 for selling potatoes at above the fixed price of 1¾ d per pound. Two witnesses claimed to have been charged 6d and 5½ d per pound. Mrs Evans refused to tell the police where she had purchased the potatoes. 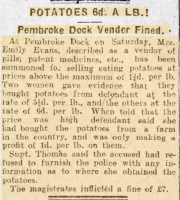 Report of charge against Emily Evans for profiteering. Cambria Daily Leader 14th May 1917.

Notes: Renée MacDonald, born 1898, entered Cardiff University to study science in 1916. She took a BSc in Biology and Botany, followed by an MSc at Swansea and a PhD in Geology and Palaeontology at Imperial College, London.

Aberdare (‘Old’) Hall students 1917. Renée MacDonald is one of them.

Notes: Margaret Haig Thomas, born 1883, was the only child of D.A.Thomas MP, first Viscount Rhondda, and his wife Sybil. The family home was in Llanwern. The family were supporters of women’s suffrage, and Margaret joined the WSPU in Newport in 1909, becoming increasingly militant. In June 1913 she spent six days in Usk Gaol following an attempt to burn out a pillar box in Newport. She strongly supported the war, but did not follow Emmeline and Christabel Pankhurst’s extreme jingoism. After working on behalf of Belgian refugees in the early months of the war, she was travelling to New York in the Lusitania, with her father, when it was hit by a German torpedo and sunk on 7th May 1915. Margaret and her father both survived, though she was unconscious in the water for over two hours. [click on the link for her account recorded in 1950 http://www.bbc.co.uk/programmes/p02qvqwp ]. In 1916 she began work for the Ministry of National Service in Wales, and London, becoming Commissioner of Women’s National Service in Wales and Monmouthshire early in 1917, particularly charged with encouraging girls and women into agriculture. Soon she was also heavily recruiting young women for the WAAC, particularly those qualified to work as army clerks in France. Women were also needed for the newly formed WRNS and WRAF. In February 1918 she was appointed Chief Controller of the Women’s Section of the Ministry of National Service.rnOn the death of her father in 1918 Margaret inherited the title of Lady Rhondda. She continued in business and public life for many years after the war.rn 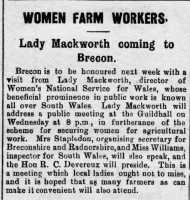 Advertisement for a meeting in Brecon to be addressed by Lady Mackworth. Brecon County Times 12th April 1917

Photograph of newly recruited WAAC clerks on the steps of the Law Courts, Cardiff, June 1917. They are about to leave for France. Margaret Mackworth is front right 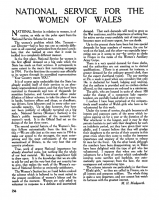 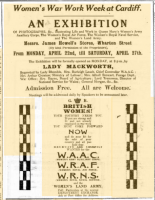 Notes: Dorothea Pughe Jones, born 1875, inherited Ynysgain, Cricieth from her father in 1897. Following his death she attended Oxford University where she studied history followed by a diploma in ethnography. She was awarded a prize at the 1901 National Eisteddfod for a Welsh history textbook. In 1902 she was part of a British Government team inspecting education in the concentration camps for Boers in South Africa. In 1910 she was one of the founders of the Bangor and District Women’s Suffrage Society. She joined the VAD in 1914, initially as Quartermaster of Caernarfon, but volunteered for service in France in 1915. She was Commandant of the Hotel des Anglaises, the hostel for the relatives of wounded officers in Le Touquet, France, for which she was awarded the MBE. Whilst in France she was appointed Churchwarden in Cricieth despite objections that she was ‘a lady’. In November 1918 she was posted to Salonika as Principal Commandant of the VAD, until May 1920. After her return she was sent by the Government to research openings for women in Australia.

Red Cross card for Dorothea Pughe Jones. She had three cards in all. 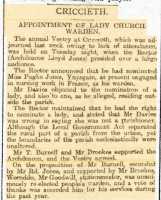 Australian newspaper report of Dorothea Pughe Jones’s role in the enquiry into openings in Australia for women from the UK. The Advertiser 10th January 1920 Adelaide S Australia.

Notes: Originally from Norforlk, Eliza was in service in Builth when she met her husband Huw Davies and they moved to Fforest Fach. Huw died in 1916 and Eliza began work at Pembrey, being promoted to supervisor. In 1920 she was awarded the MoBE ‘for courage and presence of mind in removing a burning fuze from a box of components, thus obviating what might have been a very serious explosion’. Her eldest daughter Mabel Elsie [qv] also worked at Pembrey.

Eliza Davies and her family, probably taken in 1916 while they were still in mourning for Huw. Mrs Dorothy Jones 2018. 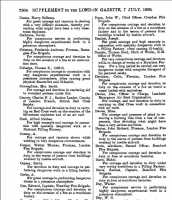 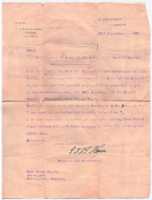