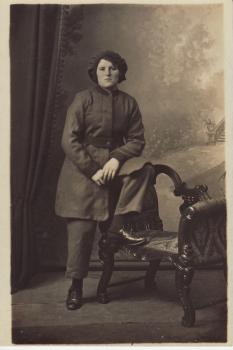 1916 saw a huge rise in the number of women in paid employment in Wales. The Military Service Act (March) allowed for the conscription of all single men and childless widowers aged 18 to 41, followed soon afterwards by married men. As thousands of men joined the army, their places in the work place were increasingly taken by women. Manufacturers and other employers who had been resistant to women workers now had little choice, though the trades unions remained opposed, worrying that the lower pay paid to women would undercut men’s wages at the end of the war. Others argued that any woman who wanted to work was already working, and that there was no pool of unemployed women to call on. A writer in the Carmarthen Weekly Reporter (23rd June 1916) opined ‘it may be possible to persuade girls who work in woollen factories to go to the farms to weed turnips and to milk cows, but what would become of the woollen factories?’ But over 40% of working age women were in employment by the end of the war, doing jobs that would have been impossible to imagine them doing a few years earlier.

An article of 18th February in the Barry Dock News (1, 2) shows that women had come a long way since the outbreak of war. It refers to Red Cross and other voluntary work, but also to the role that women were playing not only in nursing and medicine, but in ‘all kinds of occupations where hitherto they have had little or no footing’, including postwomen (3)clerks, window cleaners and ‘smart and urbanic conductors of the tramcars and omnibuses’ like Edith Haines (4).

Munitions remained the largest industrial employer of women. Conditions of work and pay were improving. However conditions remained dangerous and unpleasant. The first deaths in Britain from TNT poisoning (which gave workers jaundice, leading them to be known as ‘canaries’ from their yellow complexions) occurred in March. The first we know of in Wales was Lizzie Jones, who died on 23rd October 1916 (5). New regulations did something to alleviate the problems. Munitions workers’ uniform frequently included trousers, something that would have been unthinkable before the war. A number of girls were proudly photographed wearing them, such as this unknown young women (6) and Olwen Leyshon (7).
There were more than 3,500 women working at the Explosives Factory at Pembrey in Carmarthenshire and there were over 3000 employed at Queensferry, Flintshire. Smaller munitions works dotted the industrial landscape around Wales like the Ebbw Vale Projectile Factory (8)

Trouser-wearing girls caused something of a scandal in Margam, Glamorgan in September. Two young farm workers were pictured in a tabloid-like three column spread in the Cambria Daily Leader wearing dungarees to feed piglets and ride a farm horse (9). They were said to have gone into Port Talbot wearing them too. Women were being encouraged into agriculture by county agricultural committees though the Women’s Land Army would not be formed until 1917. Of course, many women in Wales had always worked on the land, and in Carmarthenshire, for example, it was suggested that they should be told that they ‘were doing real war service, and they should be given armlets which would make them feel proud of the work they were doing for their country’ (The Carmarthen Journal and South Wales Weekly Advertiser 23rd June). Other women workers were more amateur, such as these at Llangollen in April (10).

Of course not all women in Wales joined the formal workforce. But almost all became involved in the War. There were food shortages and huge food price increases to cope with, and knitting and sewing to be done. Quantities of ‘comforts’ for soldiers and sailors were produced, with accompanying press coverage. For example the Abergavenny Chronicle of March 3rd 1916 lists many names, including the Mozerah Sewing Gild of Llanvihangel Gobion (24 shirts, 24 pairs of socks, 33 scarves) and Mrs Mohun, British Columbia, Canada (1 pair of socks)(11).

There were many deaths in 1916. For example of women recorded on this site Elizabeth Anne (Lizzie) Jones of Cardigan, a munitions worker, died of jaundice; Frances Ethel Brace, an army nurse from Pembrokeshire died in Malta of malaria contracted in Salonika, and stewardess Margaret Williams of Holyhead drowned when her ship sank. And thousands of women lost husbands, lovers, brothers, fathers and sons fighting in France and elsewhere, or at sea. Beatrice Cope of Monmouth lost her younger son Eric on the first day of the battle of the Somme, in which 60,000 men are said to have died. He was just 18 (12).
Images 1916