Notes: Elizabeth Cooper was awarded the OBE in 1918 for her work for sailors on minesweepers operating out of Milford Haven. She had moved to the area in the 1890s as a superintendent of the Mission to Deep Sea Fishermen. Many trawlers were employed in minesweeping during the War.

Reverse of photograph showing record of award of OBE

Notes: Janet became a teacher but later left to join the Army Pay Corps in Chester. In the summer of 1918 she joined the clerical staff of the QMAAC and was stationed in London. Following a period of indifferent health she was admitted to a London military hospital in April 1919. She died a month later, aged 21.

Notes: Maud Jepson was ‘the first volunteer from Aberystwyth’ to join the group of WAAC clerks assembled by Lady Mackworth to work in France.

Notes: In October 1919 Flossie Abbott requested a pay rise from £1 12s 6d a week to £2 10s, to gain parity with the clerk of Penybont Food Control Committee. A man doing the same job would have received £3 a week. Only one member of the committee opposed the motion.

Notes: Batchie left school soon after her 18th birthday to join the VAD. She had previously trained as a volunteer with the Carmarthen Reserves. She worked as a clerk in the quartermaster’s stores at Catterick Military Hospital in Yorkshire, where she seems to have had an active social life! Thanks to Alathea Anderssohn.

Batchie Griffiths with other members of the Quartermaster’s Stores. Batchie is seated on the right. The photograph was taken on 24th March 1918. Thanks to Alathea Anderssohn.

Red Cross card for Batchie Griffiths. Note she was registered using her nickname.

Record card for Batchie Griffiths giving details of her career. 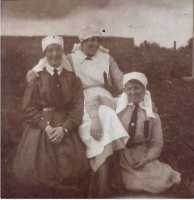 Photograph of Batchie between her friends Biggsie [l] and Minnie [r]. Note that non-nursing VADs seem to have worn ties as part of their everyday uniform. Thanks to Alathea Anderssohn. 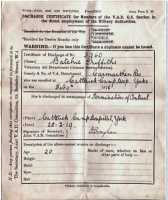 Notes: Enid seems to have joined the WAAC in Autumn 1917.

Notes: Gwendoline, born 1882, was the elder granddaughter of David Davies the coal owner and builder of Barry Docks. She, her sister Margaret [qv] and her brother David each received one third of his vast fortune on the death of their father in 1898. All three were strict Calvinistic Methodists, with a strong philanthropic streak. The two sisters began to travel widely, and to study art in Europe. In their early twenties they were beginning to form the collection that is now at the National Museum Wales. In March 1913 the collection was exhibited, anonymously, in Cardiff; the sisters covering all of the cost. It attracted 26000 visitors. At the outbreak of war the sisters promoted a scheme to invite Belgian artists and musicians to come to Wales, settling them in Aberystwyth and Llanidloes [see De Saedeleer]. In 1916, following the death of her cousin in the Dardanelles, Gwen volunteered to join the French Red Cross, leaving in July to open a Cantine des Dames Anglaises where she remained until the end of the war. The Cantine was moved in 1917 to Troyes, where her sister joined her. Gwen’s job as Directrice meant visits to headquarters in Paris, which in turn enabled her to add pictures, including two Cézannes, to her collection. In early 1918 her collections in Paris were at risk from air-raids and long distance shelling, so it was arranged for them to be shipped back to Britain. By 1922 she had given up collecting art. She felt she could not spend money in this way ‘in the face of appalling need everywhere’. During the 1920s Gwendoline set up a centre for the arts at Gregynog near Llandinam, promoting art in the cause of peace and social progress. She continued to give generously to educational and other causes. On her death in 1951 she bequeathed her remarkable collection of paintings and sculpture to the National Museum of Wales.

Gwendoline Davies (centre) and Margaret (left) at the opening of the first pithead baths in Wales, summer 1916. This was shortly before she left for France.

The Canteen in Troyes, France, of which Gwendoline was Directrice.

Loan exhibition of the Davies sisters’ collection in City Hall, Cardiff, February 1913. It includes Rodin’s The Kiss, bought by Gwendoline in 1912.

This Cézanne landscape was bought in Paris by Gwendoline Davies in February 1918.

Notes: Margaret, born 1884, was the younger sister of Gwendoline [qv] and granddaughter of David Davies the coal owner and builder of Barry Docks. She, her sister and her brother David each received one third of his vast fortune on the death of their father in 1898. All three were strict Calvinistic Methodists, with a strong philanthropic streak. The two sisters began to travel widely, and to study art in Europe. Margaret also studied drawing and printmaking. In their early twenties they were beginning to form the collection that is now at the National Museum Wales. In March 1913 the collection was exhibited, anonymously, in Cardiff; the sisters covering all of the cost. There were 26000 visitors. At the outbreak of war the sisters promoted a scheme to invite Belgian artists and musicians to come to Wales, and settle in Aberystwyth and Llanidloes. In 1917 Margaret joined Gwendoline at the Cantine des Dames Anglais, now sited at Troyes railway station. In her diary she wrote that the chief blessings in a canteen were ‘a tap of water and a gramophone. The former makes life bearable for us and the latter makes life bearable to the poilu’ (private soldier). For a while she and Gwendoline were moved to an American canteen nearer the front; there they experienced air raids and two of their colleagues were killed by bombs. In the winter of 1918-1919 she worked for three months in a canteen in Rouen organised by the Scottish Churches before returning to Wales. Later Margaret helped set up the centre for the arts at Gregynog. She continued to collect paintings, usually by modern British artists, until the late 1950s. Her collection, like her sister’s, was bequeathed to the National Museum of Wales.

Margaret Davies is the figure on the right, at the back of the Cantine des Dames Anglaises.